"Wargamer's Guide to the English Civil War", by Bill Protz 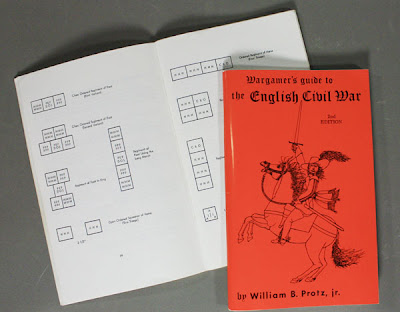 It is a great joy to find a set of rules that "model" a period of history well, and this set, first printed in 1974, is one of those rare treasures. The second edition, published in 1977, consist of 74 digest sized pages. There are about a dozen photos and illustrations, some helpful diagrams, and a good two page bibliography.

Bill breaks the game out at an almost leisurely pace, explaining the logic behind almost every facet of the rules. There are explanations for formations, movement, melee, and morale. Most of the "real rules" are contained on nine pages of charts.  The rest of the rule pages give a fuller vision as to why and how to "fire by introduction", or how, on the game table, to "take cover under the pikes".  A thorough read will prove both entertaining and enlightening. I took a highlighter to my old copy and noted some of the cases that are not "everyday occurrences"  and found it a great help. After a couple of games, most will find the charts to cover over 90% of the action involved.

The key concept to these rules is a units "CR" or "Combat Rating".  This number reflects a units melee and/or missile power, and it's morale. As an example, at 1-10 scale,I have a unit of  Covenanters, four command figures, twelve pikemen, and twenty-four musketeers. My pike division, including command, is 15 men @2 points each, plus a piper @1 point, for a total of 31 points. My two musket divisions, right and left, are 12 men each @1 point, for 12 points per division. The total regimental CR is 55 points. As the unit takes casualties, figures are NOT removed from the table. The CR losses are recorded, and as the units reaches 25, 50, and 75% loss of CR, morale drops severely.  I find that this effectively models the slow chipping away of a unit, followed by sudden and shocking collapse.

Musketry can annoy and eventually damage a unit, and artillery can demoralize a unit with one lucky round, but it is the cold steel of melee that decides the outcome of battle.  Both sides multiply their CR by a 2d6 roll, and the higher score pushes back the lower one inch. The loser checks morale, and is not forced to withdraw or routed, another round will be fought on the next turn. Protect your Flanks! The loser will generally suffer casualties at a 4-1 rate compared to the winner, and being flanked doubles the attackers CR.

Cavalry is represented by the Armored Horse, such as Cromwell's Ironsides and Rupert's lads,  Lobsters, such as Hesslerigg's regiment, and dragoons, who have no place fighting from horseback, and are rated accordingly. Dragoons, however, are amazingly versatile, and are a lot of fun in a "scouting" or "foraging" game.  There is much discussion of cavalry tactics, such as the caracole.

Half the book is devoted to the appendix, and is most useful. There are some sensible notes on army composition, and a  nice list of coat colors for several dozen regiments. Besides the aforementioned bibliography, there is a solid glossary of terms, that might not be familiar to those lacking an Osprey collection,  and most exciting of all, an awesome section on "Sieges and the Storming of Places". In this section, bill lays out four classification of assault, gives historic examples, then recommends forces and lyouts for the game table. Rules and suggestions are given for battering with artillery, use of the petard, mine and the dreaded grenadoe.  These rules would be a great addition to any black powder games needed siege rules, from the Italian Wars to the Indian Mutiny. Having played  several of these attacks, they were "White Knuckles" games, in which every turn seemed to promise mayhem and excitement.

I have enjoyed actions using these rules with as few as three units per player, and as many as fifteen. They produce a fast-paced, exciting game that requires good tactics and good fortune to be victorious. I heartily recommend them. They are available direct from Bill at