After a long layoff, due in equal parts to dealing with the aftermath of my parent's passing, and acute painter's burnout, I am ready again to tackle the English Civil War. I am still working on Warlord Games beautiful 28mm figures, but at  a rate a sane human can handle.  These will feature mostly in smaller battles set up on a 6x4 foot table, using Bill Protz's "Wargamer's Guide to the English Civil War" rules book.

As a sideline, for those with limited time and space, I will present my ECW variation of Joe Morschauser's "musket" chapter from his book "How to Play War Games in Miniature".  My version draws heavily from Bob Cordery's "Portable Wargame", as features on his "Wargaming Miscelleny" blog. The miniatures used in these games are original Jack Scruby 9mm figures, which are now available from Historifigs.  The building used are N-scale models, purchased and downloaded from Fiddler's Green. They are from the English Village line.

Here is a picture of two armies set for battle. The grid squares are two by two inches. The overall board is 23x23 inches. 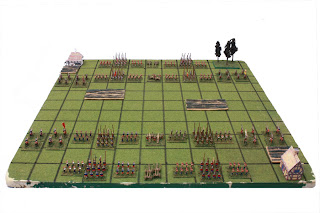