Portable Wargaming the Storming of Brentford

Tonight I gave my draft of Portable Wargame:English Civil War another test run, The scenario was the Storming of Brentford. Prince Rupert(Commander) , for the Royalists, had six units of Cavalry(elite), and a regiment of infantry (one pike unit and two musket units), as well as one Unit of falconets. 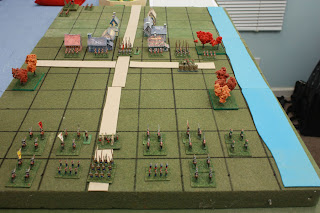 The defending forces of Parliament, led by John Lilburne(commander) had two regiments of infantry(average), structured like Rupert's, and a Unit of falconets. They were supported by another regiment of infantry that would begin moving at the sound of the first cannon shot. 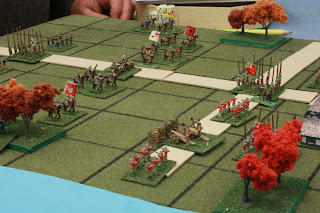 Royalist cavalry attempted , without success to take the enemy falconet by storm. Other Royalist troops began to assault the troops holding the left flank of the village. 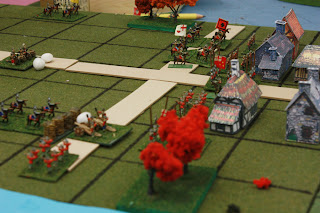 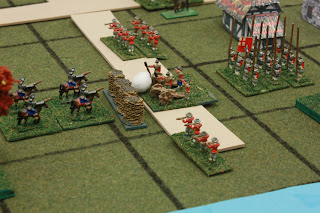 Finally, the gun position falls. Combat continues up and down the line. 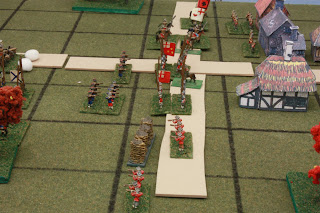 Rupert and his troop break the line and flank Lilburne and his pikes. 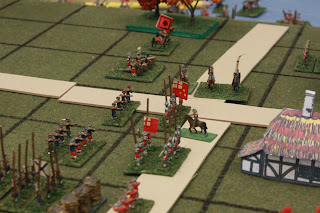 Lilburne falls under the hooves of Rupert's troopers. 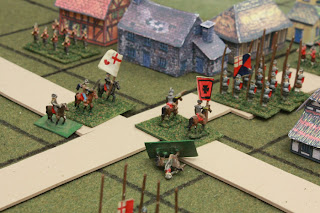 The royalists have won a costly victory. 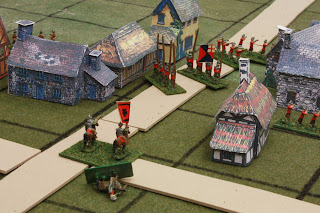 Game notes:The game played in less than thirty minutes. Commanders kept their troops in the fight. I noticed that I did not place commanders in the Strength Point Chart. That will be corrected tomorrow.

Cavalry degraded too quickly.  My inclination is to give both regular cavalry and lobsters an addition point in close combat, AND add a strength point to each Unit (3, rather than 2). I will replay this scenario under these conditions and see what results.

All figures are Jack Scruby 9mm's., still available from Historifigs. The paper building are from the Fiddler's Green English Village collection.

Next Thursday: Some Thoughts on Cavalry....
Posted by Steven Page at 8:36 PM